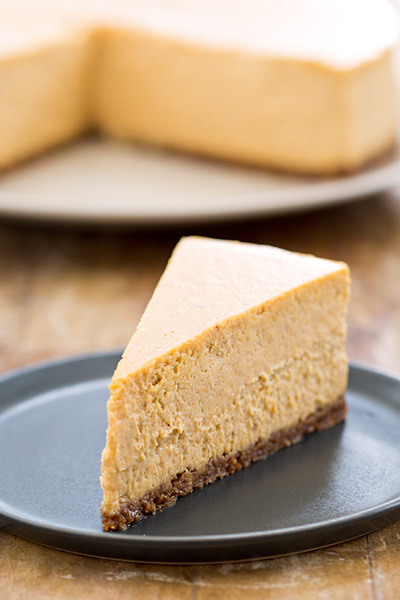 Step 1: Before You Begin: Depending on the oven and the temperature of the ingredients, the cheesecake may bake about 15 minutes faster or slower than the instructions indicate; it is therefore best to check the cake 1 ¼ hours into baking.  Although the cheesecake can be made up to three days in advance, the crust will begin to lose its crispness after only one day.  To make slicing the cheesecake easy & neat, use a knife with a narrow blade, such as a carving knife; between cuts, dip the blade into a pitcher of hot water and wipe it clean with paper towels.  The cheesecake is good on its own, but the Brown Sugar & Bourbon Cream is a grand addition.

Step 2: For The Crust: Adjust oven rack to lower-middle position and heat oven to 325 degrees F.  Spray bottom and sides of a 9-inch springform pan evenly with nonstick cooking spray.  Pulse crackers, nuts, sugar, and spices in a food processor until evenly and finely ground, about fifteen 2-second pulses.  Transfer crumbs to medium bowl, drizzle melted butter over, and mix with rubber spatula until evenly moistened.  Turn crumbs into prepared springform pan and, using hand, spread crumbs into even layer.  Using flat-bottomed ramekin or drinking glass, press crumbs evenly into pan bottom, then use a soup spoon to press and smooth crumbs into edges of pan.  Bake until fragrant and browned around the edges, about 15 minutes.  Cool on wire rack while making filling.

Step 5: Set springform pan with cooled crust on 18-inch square double-layered heavy-duty foil and wrap bottom and sides with foil; set wrapped springform pan in roasting pan.  Pour filling into springform pan and smooth surface; set roasting pan in oven and pour enough boiling water to come about halfway up the side of springform pan.  Bake until center of cake is slightly wobbly when pan is shaken, and center of cake registers 145 to 150 degrees F on instant-read thermometer, about 1 ½ hours (see note).  Set roasting pan on wire rack and use paring knife to loose cake from sides of pan.  Cool until water is just warm, about 45 minutes.  Remove springform pan from water bath, discard foil, and set on wire rack; continue to cool until barely warm, about 3 hours.  Wrap with plastic wrap and refrigerate until chilled, at least 4 hours or up to 3 days (see note).

Step 6: For the Brown Sugar & Bourbon Cream Topping: In bowl of standing mixer, whisk heavy cream, sour cream, brown sugar, and salt until combined.  Cover with plastic wrap and refrigerate until ready to serve cheesecake, at least 4 hours or up to 24, stirring once or twice during chilling to ensure that sugar dissolves.

Step 7: When ready to serve cheesecake, add bourbon and beat mixture with whisk attachment at medium speed until small bubbles form around the edges, about 40 seconds; increase speed to high and continue to beat until fluffy and doubled in volume, about 1 minute longer.

Step 8: For Serving: Slide thin metal spatula between crust and pan bottom to loosen, then slide cake onto serving platter.  Let cheesecake stand at room temperature about 30 minutes, cut into wedges, spoon cream on individual slices of cheesecake, and serve.

Impress your guests with this perfect Autumn cheesecake from Cook’s Illustrated!